Trump's GOP Is Reminiscent of Fascism's Demand for Fealty

Four months after inciting a violent attack on the Capitol in a last-ditch attempt to retain power, former President Donald Trump on Wednesday demonstrated his continued grip on his party, as House GOP officials prepared to purge Wyoming’s Liz Cheney from her leadership role for criticizing him.

The move, the latest assault on one of the few elected Republicans to publicly argue that Trump’s actions in the weeks leading up to and on Jan. 6 should ban him from public life, alarmed authoritarian experts who pointed out disturbing historical parallels.

Tom Nichols, a scholar of the old Soviet Union and a professor at the U.S. Naval War College, said the situation has a familiar ring. “The whole atmosphere is one of loyalty to the leader and to the party, and none to principle or policy,” he said.

And Jonathan Weiler, a University of North Carolina authoritarianism expert, found parallels going back to Nazi Germany. “It’s interesting that Cheney is condemning Trump specifically for his use of the term ‘the Big Lie’ to push his false claim that the 2020 election was stolen,” he said. “The ‘Big Lie’ itself is a term often attributed to chief Nazi propagandist Joseph Goebbels ? the idea being that if you push relentlessly and totally a falsehood you can get ordinary people to believe it.”

House Minority Leader Kevin McCarthy (R-Calif.) and Minority Whip Steve Scalise (R-La.) in recent days both signaled their desire to push out Cheney as House Republican Conference chair and a readiness to replace her with Rep. Elise Stefanik (R-N.Y.), who has repeatedly spread Trump’s lies about the election.

Trump himself followed up with press releases Wednesday attacking Cheney, Senate Republican leader Mitch McConnell (Ky.) and his own former vice president, Mike Pence, for failing to go along with his false claims that he had won the election but that it was stolen from him.

“Had Mike Pence referred the information on six states (only need two) back to State Legislatures, and had gutless and clueless MINORITY Leader Mitch McConnell (he blew two seats in Georgia that should have never been lost) fought to expose all of the corruption that was presented at the time, with more found since, we would have had a far different Presidential result,” Trump said in a statement that was simultaneously posted to his new blog. 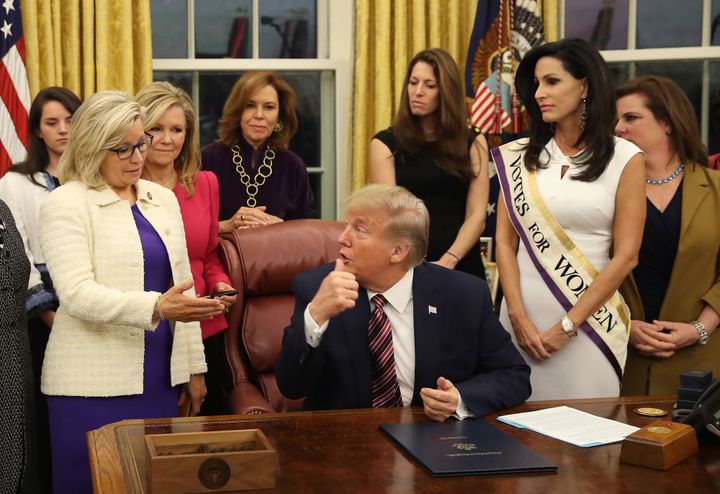 Then-President Donald Trump talks with Rep. Liz Cheney (left) after a bill-signing in the Oval Office at the White House in 2019.

“The idea that something as preposterous as the stolen election claim would itself become a loyalty test for mainstream GOPers is disturbingly reminiscent of the ways fascism demanded fealty to its cause,” Weiler said.

Cheney has been among the two dozen or so congressional Republicans who have refused to go along with Trump’s election lies, and among the 17 who voted to impeach or convict him for inciting the Jan. 6 attack on the election certification.

Cheney spokesman Jeremy Adler said the lawmaker is not backing down. “This is about whether the Republican Party is going to perpetuate lies about the 2020 election and attempt to whitewash what happened on Jan 6. Liz will not do that. That is the issue,” he said.

As to the likely attempt to vote her out of her No. 3 position at next week’s House Republican Conference meeting, Adler said Cheney is not yet commenting. “Liz will have more to say in the coming days. This moment is about much more than a House leadership fight,” he said.

Trump spent months before the election telling his followers that the only way he could possibly lose reelection was if Democrats cheated. Trump lost the Nov. 3 election by 7 million votes, but his lies that he had actually won in “a landslide” began in the wee hours of Nov. 4 and continued through dozens of failed lawsuits to overturn his losses in various states, through the Electoral College vote on Dec. 14, and then right into Jan. 6, when he repeated them during a rally he staged near the White House.

There, he encouraged the thousands in attendance to march to the Capitol to intimidate Pence and Congress into reversing his 306-232 Electoral College loss and let him retain power, and then watched from the White House as hundreds of them stormed the building. After Trump tweeted that Pence had “lacked the courage” to overturn his loss, many in his mob began chanting “hang Mike Pence” as they searched for him.

Seven people, including three police officers, died that afternoon and in the following days, two by suicide.

While at first a host of Republicans, including McCarthy, blamed Trump for inciting the attack and failing to stop it once it began, most have since backed away from any criticism, and Trump has renewed his lying about the election ? lying that House Republican leadership appears to have made the official caucus policy.

Neither McCarthy’s nor Stefanik’s office responded to HuffPost queries Wednesday.

Ruth Ben-Ghiat, a history professor at New York University and fascism expert, said their fealty to Trump is more proof of where the party is headed. “The move to purge Liz Cheney is another example of the authoritarian-style party discipline adopted by Trump’s GOP. It is more evidence that the GOP has become a far-right party beholden to a leader cult,” she said.

The only saving grace, said Nichols, is Trump’s lack of competence, even at being an effective authoritarian. “The Soviets banished people from the party, or worse, for disloyalty,” he said. “The best the GOP can do is run a primary election against Cheney while an old crank in Florida issues angry memos that no one is going to read.”

This Article Originally Appeared On HuffPost.