Civil Rights Pioneer John Lewis To Lie In State At The U.S. Capitol

WASHINGTON (AP) — In a solemn display of bipartisan unity, congressional leaders praised Democratic Rep. John Lewis as a moral force for the nation on Monday in a Capitol Rotunda memorial service rich with symbolism and punctuated by the booming, recorded voice of the late civil rights icon.

House Speaker Nancy Pelosi called Lewis the “conscience of the Congress” who was “revered and beloved on both sides of the aisle, on both sides of the Capitol.” Senate Majority Leader Mitch McConnell praised the longtime Georgia congressman as a model of courage and a “peacemaker.”

“The arc of the moral universe is long, but it bends toward justice,” McConnell, a Republican, said, quoting the Rev. Martin Luther King Jr. “But that is never automatic. History only bent toward what’s right because people like John paid the price.”

Lewis died July 17 at the age of 80. Born to sharecroppers during Jim Crow segregation, he was beaten by Alabama state troopers during the civil rights movement, spoke ahead of King’s “I Have a Dream” speech at the 1963 March on Washington and was awarded the Medal of Freedom by the nation’s first Black president in 2011.

Dozens of lawmakers looked on Monday as Lewis’ flag-draped casket sat atop the catafalque built for President Abraham Lincoln. Several wiped away tears as the late congressman’s voice echoed off the marble and gilded walls. Lewis was the first Black lawmaker to lie in state in the Rotunda.

Members of the Congressional Black Caucus wore masks with the message “Good Trouble,” a nod to Lewis’ signature advice and the COVID-19 pandemic that has made for unusual funeral arrangements.

The ceremony was the latest in a series of public remembrances. Pelosi, who counted Lewis as a close friend, met his casket earlier Monday at Joint Base Andrews in Maryland, and Lewis’ motorcade stopped at Black Lives Matter Plaza near the White House as it wound through Washington before arriving at the Capitol. 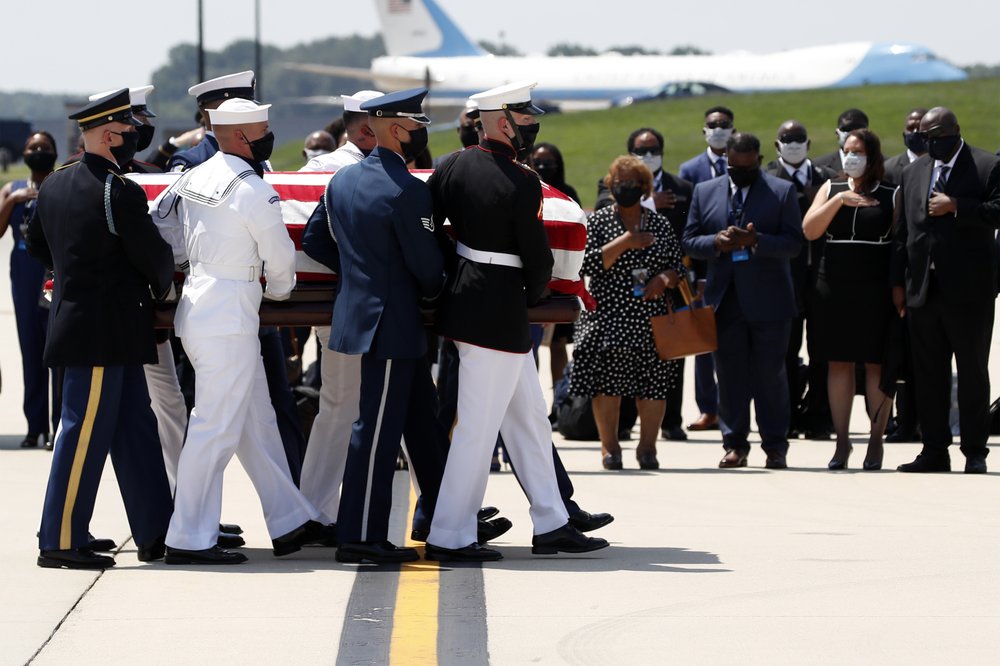 The flag-draped casket of Rep. John Lewis, D-Ga., is carried by a joint services military honor guard to the hearse Monday at Joint Base Andrews outside Washington. (AP Photo/Alex Brandon, Pool)

The Democratic speaker noted that Lewis, frail with cancer, had come to the newly painted plaza weeks ago to stand “in solidarity” amid nationwide protests against systemic racism and police brutality. She called the image of Lewis “an iconic picture of justice” and juxtaposed it with another image that seared Lewis into the national memory. In that frame, “an iconic picture of injustice,” Pelosi said, Lewis is collapsed and bleeding near the Edmund Pettus Bridge in Selma, Alabama, on March 7, 1965, when state troopers beat him and other Black Americans as they demanded voting rights.

Following the Rotunda service, Lewis’ body was moved to the steps on the Capitol’s east side in public view, an unusual sequence required because the pandemic has closed the Capitol to visitors.

Notably absent from the ceremonies was President Donald Trump. Lewis once called Trump an illegitimate president and chided him for stoking racial discord. Trump countered by blasting Lewis’ Atlanta district as “crime-infested.” Trump said Monday that he would not go to the Capitol, but Vice President Mike Pence is scheduled to pay his respects.

— A timeline of events in the life of John Lewis

Just ahead of the ceremonies, the House passed a bill to establish a new federal commission to study conditions that affect Black men and boys. 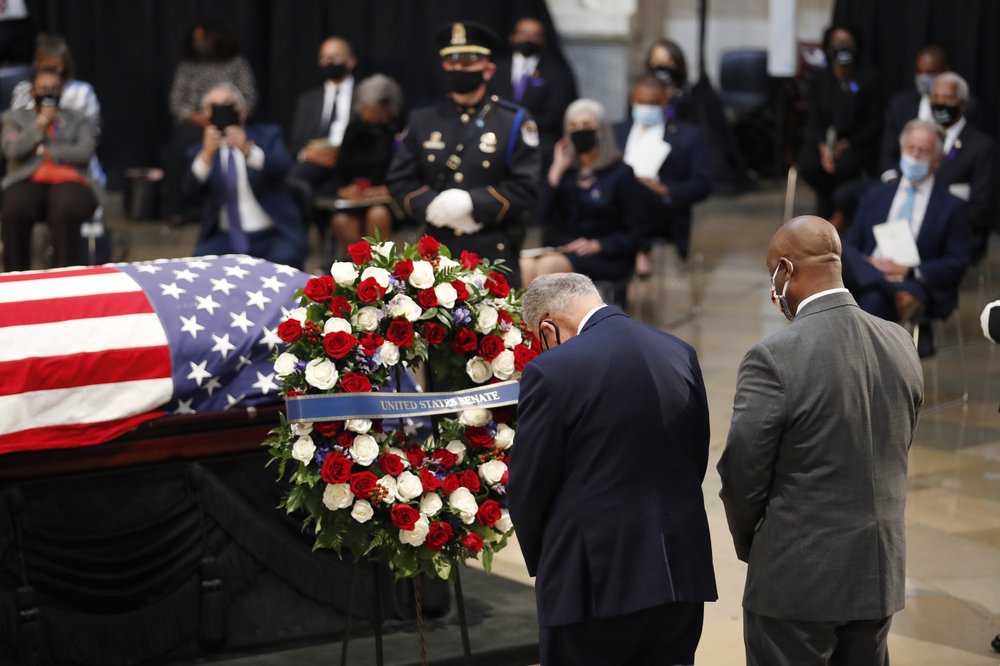 Born near Troy, Alabama, Lewis was among the original Freedom Riders, young activists who boarded commercial passenger buses and traveled through the segregated Jim Crow South in the early 1960s. They were assaulted and battered at many stops, by citizens and authorities alike. Lewis was the youngest and last-living of those who spoke on the steps of the Lincoln Memorial at the March on Washington.

The Bloody Sunday events in Selma two years later forged much of Lewis’ public identity. He was at the head of hundreds of civil rights protesters who attempted to march from the Black Belt city to the Alabama Capitol in Montgomery.

The marchers completed the journey weeks later under the protection of federal authorities, but then-Alabama Gov. George C. Wallace, an outspoken segregationist at the time, refused to meet the marchers when they arrived at the Capitol. President Lyndon Johnson signed the Voting Rights Act of 1965 on Aug. 6 of that year.

Lewis spoke of those critical months for the rest of his life as he championed voting rights as the foundation of democracy, and he returned to Selma many times for commemorations at the site where authorities had brutalized him and others. “The vote is precious. It is almost sacred,” he said again and again. “It is the most powerful nonviolent tool we have in a democracy.”

The Supreme Court scaled back the seminal voting law in 2012; an overhauled version remains bottle-necked on Capitol Hill, with Democrats pushing a draft that McConnell and most of his fellow Republicans oppose. The new version would carry Lewis’ name.

Lewis crossed the Edmund Pettus Bridge for the last time Sunday on a horse-drawn carriage before an automobile hearse transported him to the Alabama Capitol, where he lay in repose. He was escorted by Alabama state troopers, this time with Black officers in their ranks, and his casket stood down the hall from the office where Wallace had peered out of his window at the citizens he refused to meet.

After the memorial in Washington, Lewis’s body will return to Georgia. He will have a private funeral Thursday at Atlanta’s historic Ebenezer Baptist Church, which King once led.

Barrow reported from Birmingham, Ala. Associated Press writers Mary Clare Jalonick and Darlene Superville contributed to this report from Washington.