global gathering
>> Your Glogat News | Blogs | Log in | Sign up
France: No Excuse to Get Out, 1 Baguette at A Time

LE VESINET, France (AP) — In France, the fight against COVID-19 is being waged one baguette at a time.

No longer just a mere staple, the iconic loaf and the French daily ritual of buying it have become loaded with moral, civic and public health considerations that could never have been imagined before the new coronavirus turned life upside down.

In a nation in lockdown, popping out for a fresh baguette is proving a handy excuse for people to get out of the house. There is one notable exception: a town on the Mediterranean coast where the mayor has banned people from doing just that, to keep them indoors.

But eschewing the crusty comfort of a fresh-baked baguette has become significant, too — a small sacrifice in this new era where sacrifices are being asked of many. For some, not buying bread daily and instead staying indoors to try to stay healthy has become an act in itself, a gesture of solidarity with the doctors and nurses fighting to save lives in stressed emergency wards.

For most people, the new coronavirus causes mild or moderate symptoms, such as fever and cough that clear up in two to three weeks. For some, especially older adults and people with existing health problems, it can cause more severe illness, including pneumonia, and death.

Trying to steer a path between their love of bread and beating the virus, some in France are now buying baguettes by the armful and freezing them. That would have been a gastronomic no-no in normal times. But defrosting and reheating is now a pragmatic, civic-minded and health-conscious compromise, certainly better than no baguette at all.

The French have baked long loaves for centuries and coined “baguette” — or stick — around 120 years ago in Paris. Millions of French consume billions of baguettes each year, and not just as fuel. Diners use hunks of bread as tools for pushing food around their plates and onto their forks. The crust makes the bread easy to grip; its airy internal sponge soaks up sauces and the bloody juices of cooked meats. A baguette’s saltiness accentuates flavors, while its doughy neutrality tames the tang of the most pungent cheeses.

“It’s indispensable. You need bread to push your food stuffs, to give them taste, for nourishment. It is good for everything,” masked shopper Yves Lagrellette said this week as he made what has now become his weekly baguette run in Le Vesinet, west of Paris. He bought five in one go, for freezing. He used to buy one daily.

When the government locked down France earlier this month, shutting down schools and stores deemed non-essential and forcing families indoors, it also gave bakers special dispensation to work every day of the week if they wish.

Baker Margot Hazard says she and her husband, Cyril, feel that with their breads and cakes, they are providing a slice of normalcy to customers who line up, standing apart, outside their door, respecting each other’s space and handwritten signs on the window that read: “Three people maximum in the bakery.”

“The work really is tough at the moment,” Hazard said. “Some clients are very worried about us touching their bread and touching their change. They are all a bit on edge. And we are on edge, too.”

But “it is super important for everyone’s morale,” she added. “It’s important that people eat what they want to eat, to keep their spirits up.” 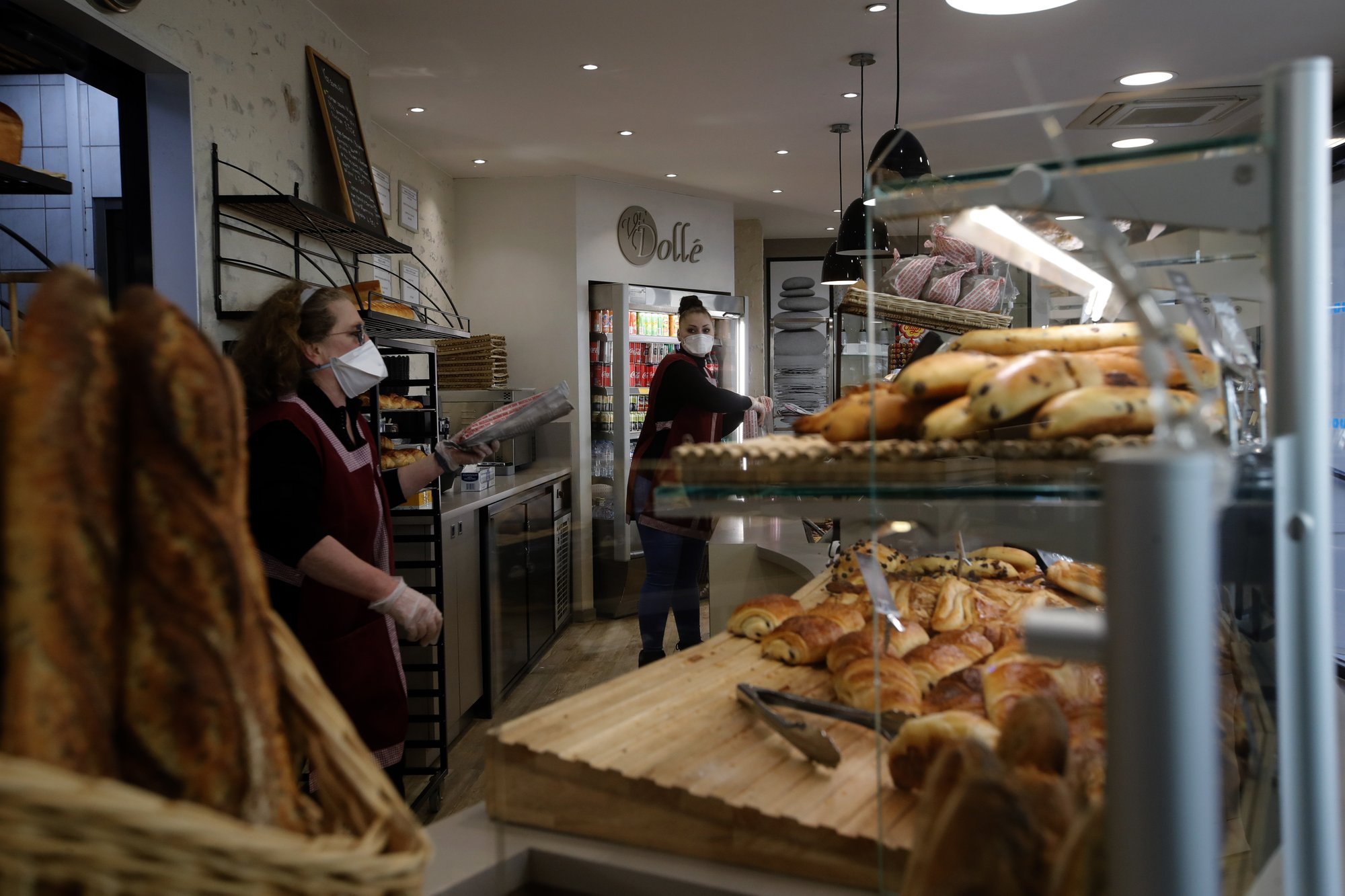 “A life without bread, cheese and wine is not French,” she said.

Customers Marie and Jean-Claude Lemeux, now work-from-home bankers, agreed. No sooner had he bought their baguette that he ripped one end off and nibbled it, right there in the street. That crusty nub of pleasure even has its own name — “le quignon.”

“It’s better fresh. It’s hot, crusty,” he said. And baguette-buying “allows us to get out.”

“The sharing of bread is an anchor at the dinner table, at family meals,” she said. “We feel a need to focus on family, on food, for life to go on. It’s symbolic.”

But in the Mediterranean town of Sanary-sur-Mer, buying only one baguette risks a police fine of 135 euros ($146). Mayor Ferdinand Bernhard says people shouldn’t be using the buying of bread as an excuse to go out every day.

“Anyone caught coming out of a bakery with just one loaf will be fined,” he said in a telephone interview. “If you go once a week, you cut the risk by a factor of seven — for you, the baker, his entourage and yours.”

“This is no time for people’s moods. The priority is to not get sick,” he said. “You can freeze bread. You can even live without it.”

“It’s not a sacrifice. It’s an adaptation.” 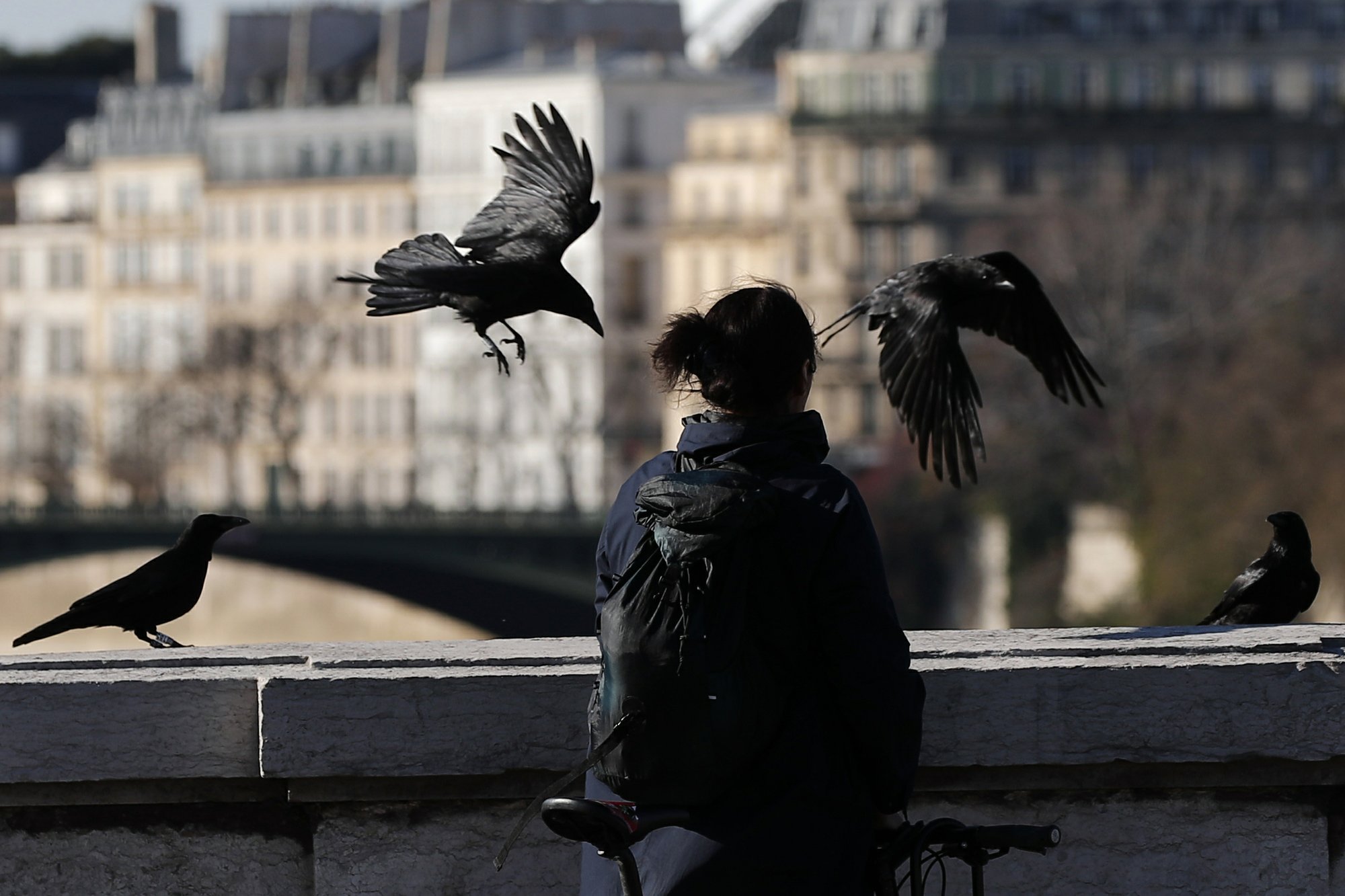